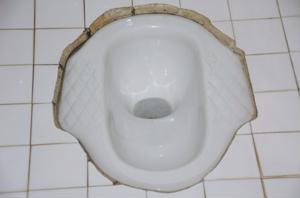 The Western toilet hasn't changed much over the past 100 years or so, but with smart toilets and water conserving designs becoming all the rage, there are an increasing number of researchers looking to reexamine the overall setup of the standard commode. According to Nature World News, Peter Codling, a recent graduate from London's Royal College of Art, has created a new toilet dubbed the Penseur. The device turns bathroom convention on its head and situates the body in a squatting position, which may actually make it healthier in the process.

"You have a muscle that's connected to your pelvis that in a sitting position cinches closed your colon and stops you from going completely and quickly, as you should do," Codling told the news source. "In the squatting position this muscle is relaxed and you can go and your colon is straightened."

In addition to the altered seating position, Codling's commode employs many modern technologies found on smart toilets, such as a bidet and massage function as well as a touch screen remote to control water pressure. While his idea hasn't been picked up by manufacturers just yet, it could be a window into the future of toilet technology.

While Codling's idea is the first to blend the design of Western and Eastern toilets into one dynamic package, there are other inventors in the U.S. who have put their own spin on the idea. According to The Huffington Post, American Robert Edwards created the Squatty Potty in late 2012. Featuring a small platform that fits over an existing toilet, this can help users achieve the squatting position. The inexpensive product can already be found at a number of bathroom and body stores and is one of many new devices on the market that advocate for the new position.

While squatting may seem like a more awkward way of doing one's business, there is a growing contingent of researchers that believe that it could have a number of viable health benefits. Squatting could eliminate strain that is one of the main causes of hemorrhoids, as well as delivering an experience that is far more comfortable than conventional toilets. Clearly, there is a wealth of interest in these new toilet designs and they could become fixtures in washrooms in the future.