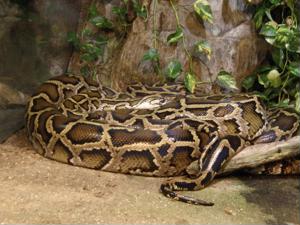 An 35-year-old man in Israel was bitten by a snake while sitting on the toilet. Luckily, the snake was not poisonous, and the man is expected to survive the encounter, though understandably rattled. The man was taken to the hospital.

After running from the bathroom in shock and horror, the man was taken to the Rambam Medical Center. He had been visiting his parents in Galilee at the time of the incident. While the bite was enough to attract the attention of the press, the man will be fine, showing only scars for his traumatic experience, according to the Huffington Post.

"This is the first time I've seen a snake bite like this. Luckily, all tests seem fine and the man is feeling well," said on the paramedics who treated the man.

While there will "undoubtedly be bite marks in the area," according to a hospital representative, the man should make a full recovery and be discharged as soon as tests are completed. While it sounds strange, this is not the first time that such an injury as occurred. A Taiwanese man was bitten by a snake in 2009 while on the toilet, though he considered it to be the animal's call for help, as it was stuck in the septic system.