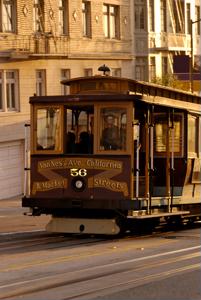 The workday sometimes feels never-ending, but imagine how much longer it would feel if you were not able to use the bathroom!

Employees of the San Francisco Municipal Railway (MUNI) are taking a stand and demanding access to bathrooms during their shifts. Currently, the MUNI cars are not equipped with restrooms in which drivers may relieve themselves, according to the San Francisco Examiner.

After much back and forth negotiation between the San Francisco Municipal Transportation Agency and the Transport Workers Union Local 250-A, which represents about 2,000 MUNI operators, a proposed solution has been drafted. If the measure passes, the Transportation Agency will install 36 standalone bathrooms on the sidewalk, so drivers can make convenient pit stops during their routes.

The bathrooms will be about 10 feet high and measure approximately 8 by 11 feet in length and width. Each unit has an estimated cost of $170,000, and this price tag has been the source of considerable contention.

"I would hope that the MTA would really try to whittle it down," said Supervisor Scott Wiener. "These are large facilities that serve, I believe, only bus operators."

An alternative to these standalone toilets is to establish an agreement with local businesses, so operators may use their bathrooms. MUNI has done this in several past cases, and the costs for such arrangements are in the ballpark of $4-5,000 per year.

Board of Supervisors President David Chiu suggested to strike more of these deals to reduce the cost of the exclusively-MUNI toilet proposal.

MUNI operators are displeased with this response from city officials.

"We refuse to be treated as second-class citizens in regards to using a restroom while serving the public and The City," said Ronald Austin, vice president of Local 250-A. "If there is a concern about a restroom costing $170,000, I have to ask how much does it cost for The City in workers' compensation costs for renal failure of an operator? I think it's a lot more than $170,000."

This toilet drama casts an unflattering light on the MUNI system, which is rare for this otherwise iconic and well-liked transportation association. MUNI was established over 100 years ago, and was the first publicly-owned, land-based transit agency in the United States. The famed San Francisco cable car is the original MUNI platform, and has become the city's trademark, as recognizable as the Golden Gate Bridge.