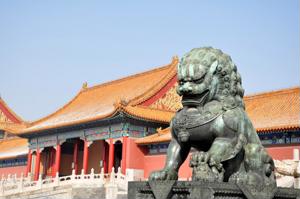 The bathroom may not be a particularly appetizing setting for your dinner, but Beijing restaurant House of Poo proves that it is a memorable one.

The restroom-themed restaurant is stocked with poo-raphenalia, serving dishes in miniature replicas of bathtubs, sinks and commodes. House of Poo offers its guests a seat on toilets - topped with Winnie the Pooh warmers - and walls crowded with bathroom knickknacks, like shower curtains and glittering urinals. There are no traditional tables, rather the guests eat atop glass covered sinks. Even the restaurant's tiled floors add to the illusion of dining in a giant, shared restroom.

The decor at the House of Poo is off putting to some, who blame all the bathroom imagery for killing their appetite, but traveler and CNN iReporter Alain Sojourn says that the environment creates a fantasy.

He understands how eating out of mini toilets that could make one queasy from his personal experience at the House of Poo, "But then, that's the point," he says. "You just entered the bathroom and not a restaurant."

The menu at the House of Poo is filled with toilet-centric cuisine. The food is Western, although the desserts incorporate some local Chinese flavor. Dishes include "poo funny mud", a mashed potato dish served in a tabletop toilet, and beef curries floating in a tiny bathtub.

"The food wasn't really that good," says Alain. "Or maybe it was good, but the environment I was in might have contributed to my judgment of the food's taste."

Marilyn Mai, the dining editor of The Beijinger, visited the restaurant earlier this year. She ordered a dessert dish of soft serve ice cream, shaved ice, red beans and sprinkles served in - of course - a little toilet. Mai writes in a blog entry about the House of Poo that between being served in a replica commode and the restaurant's surrounding environment, the dessert was impossible to enjoy.

House of Poo is not the only restaurant of its kind, as CNN reports there are similar toilet-themed concepts at dining establishments in Taiwan, Japan and South Korea.

"I would recommend this to fellow adventurous tourists with a fun attitude," says Alain. "The experience might gross you out at first, but when you're with the right people, it will be a memorable experience."

Your last post [Beijing restaurant serves dishes in miniature replicas of toilets, tubs and urinals] was freaking awesome. I have gone ahead and added your stuff to my Feedly account. Please keep me updated if you post anywhere else.