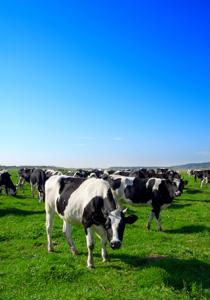 An unfortunate Australian calf has become something of an Internet celebrity after getting its head trapped in an unused toilet. The incident took place in Bringelly, New South Wales, when the bumbling bovine stuck its head into the abandoned commode while searching for a green pasture.

Luckily for everyone at the scene as well as the calf, the toilet was safely removed by the Royal Society for the Prevention of Cruelty to Animals, the organization that was called after the calf's head remained lodged in the toilet for a few days. Residents had attempted to remove the toilet, which restricted the cow's ability to eat and move freely, but were not successful, as the distressed animal did its best to avoid them.

It seemed the toilet had been stationary for quite some time, as enough grass had grown through it to attract the young cow.

Donna Morgan, a local official, eventually was able to remove the toilet from around the cow with careful use of a saw after the animal was tranquilized. She said that the toilet was one of the strangest places she had ever heard of an animal getting stuck, according to the Southwest Advertiser. The animal, though it suffered from some minor irrational as a result of its stay in the toilet, is expected to make a full recovery.

"We believe that the toilet was left outside as rubbish and that the calf became stuck in the bowl by trying to eat the grass which had grown up through it," Morgan elaborated to the news source.

She used the situation as a prime example showcasing the importance of keeping the grazing and paddock areas of small farms free of debris. Items, such as toilets, can be harmful or potentially deadly to animals that may find themselves stuck.

The cow's picture and story have been circulating around the Internet to great acclaim. The popularity of this odd choice of residence for an animal isn't uncommon either, as readers tend to love learning about creatures finding themselves in odd situations.

In addition, the cow has also been the target of many terrible puns published in reputable periodicals. The Telegraph gave the story the headline of "Poor smelly moo stuck in a loo​," while The Huffington Post wrote that "There's a calf in Australia who may be understandably flushed with embarrassment..."