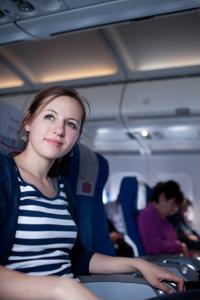 Flight 931 from San Francisco to London faced one shortage that was not considered likely to happen: Toilet paper. While other amenities were stocked, it seems that the United Airlines staff neglected to restock toilet paper.

The situation was not totally clear to passengers and staff until one of the on-board lavatories ran out of toilet paper. Instead of transferring paper from one bathroom to another, the staff improvised and used cocktail napkins. Though the move saved time, many on board the plane were still upset.

Photos of the makeshift dispenser crafted by crew members out of cardboard and duct tape quickly found their way onto the internet. According to the Consumerist, passengers found obvious humor in the printed napkins, which read, 'Fly by the tips of your fingers.

Though the shortage of toilet tissue was known before the flight was going to take off, the airline chose not to restock on the item. If they had, the flight would have been delayed and passengers could have potentially missed connecting flights upon arrival in London. Airline officials apologized for the lack of toilet paper in a statement provided to The Consumerist. The airline did not have time to restock before getting to San Francisco and then flying to London.

"We did not have the correct amount of paper products onboard United flight 931 prior to takeoff from London Heathrow. Rather than delay the flight, our crew chose to operate as planned," read the statement.

Unfortunately for United, this news comes  on the heels of an unfavorable customer satisfaction survey. The company placed part of the blame on its recent merger with Continental Airlines, notes ABC.

While the supply shortage was certainly inconvenient for many on board, it's not the first time flights have run out of essential items. It's typical to run low on particular beverages or foods during a flight, but one flight gained particular notoriety for having to stop for fuel and then asking passengers to pay in cash.

The flight happened in the summer of 2012, and the mishap was the result of a plane being rerouted from Beirut to Damascus, where airplane fuel can only be paid for in cash. Luckily for the passengers, France Air wound up footing the bill in the end, according to CNN.