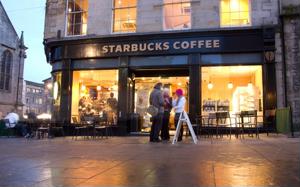 The accusation isn't literal - we hope. The Starbucks staff in the Bank of China Tower in Hong Kong reportedly took water from a faucet in a local bathroom back to the shop, and had been doing so since they opened in the fall of 2011. This is the store's sole source of water.

"There is no direct water supply to that particular store, that's why we need to obtain the drinking water from the nearest source in the building," said Wendy Pang, a spokesperson for Starbucks.

The scandal broke when a picture of the tap in question surfaced online. The faucet has an official-looking sign under it in both English and Mandarin Chinese that states, "Starbucks Only," and was mere steps from a rusty urinal. Kotaku translated the original story, reported by Apple Daily.

Apple Daily reports that a Starbucks employee would use a cart to transport the water from a nearby men's bathroom, sometimes making up to five trips per day. The employees reportedly filter the water before using it to brew coffee, but comments on the store's Facebook page ask why Starbucks, a company with a huge profit margin, wouldn't just obtain their own source of water.

A Hong Kong resident told the source that it took common sense not to use water from toilet pipes.

Ben Cowling, a professor at University of Hong Kong's School of Public Health, said that the concern lay with the viruses that a filtration system might miss.

"If the staff need to frequently visit the toilet they may increase the risk of bringing other pathogens from the washroom into their food and drink preparation area," Cowling told HK Magazine.

According to the source, the Food and Environmental Hygiene Department surveyed the location in response to the complaints, and have determined that the practice is not in line with official regulations.

Grace Li, a second spokesperson from Starbucks, told the magazine that independent lab tests had ensured that the water was up to regulation by both the Food and Environmental Hygiene Department and World Health Organization standards. The coffee shop, in light of the recent events, has switched to distilled bottled water.