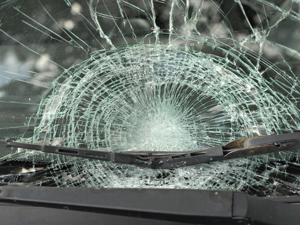 Can you imagine a toilet flying through the air and hitting your car? This may sound like an outlandish nightmare, but for a teenager in Thorndike, Maine, it was a Monday morning reality.

MSN reports that a portable toilet flew through the air and hit a teenage girl's car while she drove to school on a Monday morning in early May. The toilet fell directly on the girl's red Jeep Cherokee, causing the unsuspecting driver to swerve across the road.

Luckily, the girl came out unscathed, though understandably shaken. She whipped out her phone and called 911 as soon as the accident occurred, emotionally recounting the event.

The accident could've been messier: According to authorities, the toilet hadn't been used.

"Fortunately, it was clean," Jeff Trafton, chief deputy of the Waldo County Sheriff's Office, said, according to the source. "It was a true Monday morning happening."

Insecure toilet transportation is the culprit

Though it may have seemed like the toilet came out of nowhere, the incident was the result of another driver's carelessness.

The portable lavatory flew from the truck of a man delivering toilets to the girl's own Mount View High School. The truck driver, Ronnie Furrow, failed to properly lash down one of the porta-johns, so when he turned out of the school's parking lot and onto Route 220, the cumbersome toilet flew off his vehicle and into the road. As fate would have it, the girl's red Jeep was in the line of fire.

According to the source, Furrow has received a summons for his unsecured load. The girl was lucky in that she reacted quickly to the projectile toilet and survived the incident unhurt.

Because the girl was a juvenile, her name was not released. Chief Deputy Trafton noted that she was in no way at fault for the accident.

This flying porta-john is testament to the fact that you never know what might hit you when you're on the road. Even if it's early in the week and you only have one cup of coffee under your belt, be alert and ready for anything. If your reaction time is quick enough, like the teenager's in Maine, you may avoid unlucky consequences. Plus, you'll have a good story to tell at the end of the day. After all, not many people can say a toilet has hit their car from above.