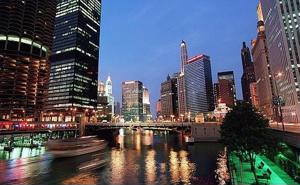 A suburb of Chicago held a tongue-in-cheek opening ceremony for a new restroom facility at a popular park earlier in May. The toilets fill a much needed role in the area, and city officials had some fun with the opening remarks and what some reporters are calling a "potty party." The washrooms opened in time for Memorial Day weekend.

Locals Bette and Ken Kalina petitioned for permanent facilities in Central Park in 2011, and garnered over 1,000 supporters, according to the Naperville Sun.

A $245,850 contract was approved by city council members for the structure in March. The small concrete facility includes LED lighting, in-floor heating and a pup friendly water fountain in front, and features three stalls in both the men's and women's room. It is also handicap accessible.

The mayor of Naperville, George Pradel, held a toilet paper cutting ceremony to celebrate the opening of a new commodes in Central Park. The park is often used for concerts and community events, but this is the first time it plays host to a permanent bathroom. According to the Daily Herald, those who frequent the events have been requesting an improved washroom facility in lieu of portable toilets.

The mayor opened the ceremony with a few words on what the facilities meant for the residents. Pradel took the potty party as an opportunity to delight attendees with bathroom puns. "It is my sworn 'doodie' to provide the public with some relief," he quipped, before stating that he believed the new facilities would be a "flushing success."

The mayor praised those who helped make the construction of the structure possible, stating that by working together, the town has improved its quality of life, and that he knows the residents of Naperville will appreciate the addition to their community.

The director of the Naperville Municipal Band, Ron Keller, is having fun with the idea as well, telling the source that he plans to play "Happy Days Are Here Again" and the "Crimson Flush" at the next concert to commemorate the recent addition.

Charmin was the official brand used in the toilet paper cutting ceremony, which Keller, Pradel and park board President Kirsten Young conducted prior to the ceremonial first flush. The mayor was granted this honor, which he completed while joking with reporters.