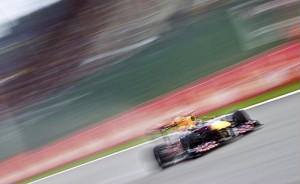 A man out of Licolnshire, England, recently built a working toilet with a twist - the motorized lavatory can be driven at 55 mph.

Colin Furze, a 33-year-old plumber, beat the world record for fastest toilet by installing a 140 cc engine in a mobility scooter before building a toilet on top of the stripped frame, according to the Daily Mail. The toilet is powered by petroleum, and gets 10 miles to the gallon.

Furze gave the mobile latrine multiple gears and disguised the stick shift as a toilet brush. He also added a way of attaching reading material to the handlebars, in addition to giving the vehicle the ability to flush while in motion with the push of a button. Furze also installed a toilet paper holder and a towel bar, and covered the base in racing checks, just for authenticity.

"I'm a plumber and I'm used to putting toilets together so I thought I'd try the challenge of making the fastest," Furze told Metro UK.

The new world record holder told the source that the multi-function vehicle is treacherous to operate, due to a slippery seat and the top heavy nature of the lavatory. This particular challenge is a result of the water needed to make it able to flush. Furze also noted that he got water on himself whenever he went over any sort of bump in the road, and that the device is difficult to steer.

Furze made a video for YouTube's comedy week, featuring himself driving the toilet on wheels at breakneck speeds, towel and toilet paper flowing in the wind, driving on both asphalt and grass. He also taped the building of the mobile commode for his YouTube channel called Fast, Furious and Funny.

The British plumber's contraption beat out the world's previous fastest toilet, which was driven by Canadian stunt woman Jolene Van Vugt in 2012. This motorized toilet was designed like a go-kart and managed to hit 46 mph at the Sydney Olympic Park, according to Car Buzz.

In order to satisfy Guinness world record standards, the former motocross champion did two separate 100 meter legs, and an average was taken from each time.

This stunt was part of Nitro Circus, a spin off of a hit MTV series.