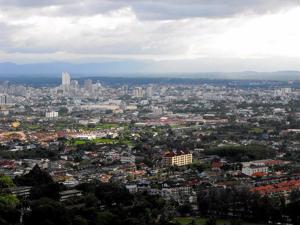 Here's something you probably weren't aware of: So-called "squat" toilets in Thailand have been thought to cause arthritis in the knees from repeated and prolonged periods of time awkwardly squatting. Therefore, according to the International Business News Times, the nation's Public Health Ministry is getting plans together to remove the uncomfortable johns in favor of more conventional sit-down toilets.

"Prolonged periods of squatting have been found to cause arthritis. It is hoped the new toilets will save a few more knees and boost tourism," a nameless source told the International Business Times.

The source also explains that in the Ministry's estimation, more than six million Thailanders are suspected to have developed arthritis from using squat toilets, and all but 15 percent of Thai households still have the devices. The Tourism Authority of Thailand announced to the source that it thinks the new prevalence of sit-down toilets will boost the amount of vacationers by as much as six percent this year. However, amount of people enjoying downtime in Thailand has already made strides in recent years, as it jumped up to 22 million people - more than 15 percent higher than the the previous year - in 2012.

Meanwhile in India, one teacher and the primary administrator of a Mumbai school garnered themselves some unexpected attention from police officers after they allegedly forced a trio of students into a "chain gang" like situation and bathroom cleaning. For the crime of fighting in the classroom, three boys were sent to walk around while chained together and forced to clean the school's toilets, according to the news source PostNoon.

The source continues to explain that police learned of the incident when one of the children's fathers called them to complain. He said that he had, at first, attempted to get the school to take action on its own, but they brushed him off when he told them that parading students around in chains in order to set an example for the others was going too far.

Dhananjay Kulkarni, the deputy commissioner of police told the source that his department registered a case against the parties thought to be responsible in accordance with the Juvenile Justice Act, however he wants to get the students' side of the story before taking the next steps.