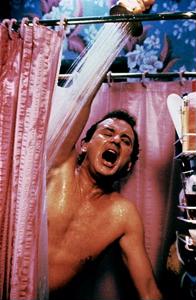 While many of the most memorable bathtub-based scenes in film have learned a bit too heavily on subject matter that may not be particularly wholesome, others have either been exceptionally humorous, innovative or been points where the plots of classic movies underwent a pivotal turning point. It just goes to show that when it comes to time in the tub - anything can happen ... At least in the fictional world of cinema.

"A Nightmare on Elm Street"

It's never a good idea to fall asleep in the bathtub, but this is especially true when you're being hunted by a homicidal ghost that attacks his victims in their dreams. Time magazine's list of the all-time favorite movie scenes that revolve around bathtubs includes the occasion in which the protagonist in the 1984 horror classic Nancy Thompson - portrayed by Heather Langenkamp - gets dragged underwater during a stress-relieving hot bath. The source explains that some inventive special effects were required for director Wes Craven to make the scene as scary he wanted it to be - a swimming pool was made to look like a bathtub.

When he realized there was no apparent way out of having to live the same day over and over again into infinity, television reporter Phil Connors - played by Bill Murray - attempted to electrocute himself by dropping a toaster into a full bathtub. Of course Connors' plan to stop his February 2 from repeating, just like many others attempts throughout the course of the film, only leads to more hilarity. Film School Rejects tossed this scene from one of Murray's most acclaimed films on its compilation of bathtub scenes.

Not to be confused with a shower scene from the film, which we need not mention here, but Time magazine points to occasions in the 1983 landmark crime drama when Al Pacino's Tony Montana lounges in a bubble bath. Time explains that there was something about Montana's swagger that made virtually everything he did in the movie look tough, including lounging in a massive bubble bath.

Okay, technically Marion Crane's taking a shower in her iconic death scene at the hands of (spoiler alert) Norman Bates, but it's kind of hard to write a list such as this without acknowledging that perhaps one of the most memorable movie scenes of all time just-so-happened to include a bathtub in the background.