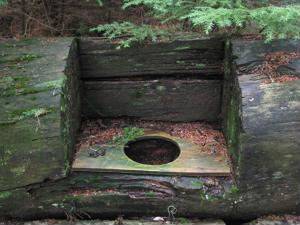 While it's certainly on a much smaller scale than the massive Restroom Cultural Park in South Korea, an exhibit called "Behind Closed Doors - American Bathrooms Through the Ages" at the Blennerhassett Island Museum of Regional History in West Virginia is paying tribute to toilets.

According to the Hurd Herald, the collection of historic johns will be on display through 2013, and a lecture series will be conducted by state park historian Ray Swick. Pictures included with the Herald article include a wooden chair with a hole drilled in the seat - designed for a child, judging by the painting of a happy bear decorating the back of the seat - and one toilet that more closely resembles a record player than what we've come to think of as a conventional toilet.

However, instances of historic toilets and other common bathroom utilities being displayed in the same way as art or any other artifact aren't as rare as some people might assume. There's also the Plumbing Museum based in Watertown, Mass.  Arguably a bit more earnest in its tone than the Restroom Cultural Park, the more than 30-year-old site is intended as a tribute to engineers and plumbers, and all the advances those in these fields have made for sanitation and convenience through the ages. While it was situated in Worcester until 2008, the renovated museum is now located in the Boston suburb.

The Historic Bathrooms Society is a thing that exists

Turns out, there's a litany of people with interest in the rich history of plumbing and bathroom-oriented technology. Just look at the Historic Bathroom Society - an entire network of people who, according to the organization's website, document narratives revolving around "our nation (sic) greatest human waste facilities."

Though apparently it only came into existence fairly recently, the website already contains a pair of articles from photographer and lavatory fanatic Michael Schwarz.  He reports on the Logan Country Museum, which contained numerous old time toilets.

It just goes to show that there's reasons aside from sanitation and your own personal sense of comfort to maintaining your bathroom. For all you know, it could end up in a museum someday. So make sure to keep it clean, and update any utilities when they aren't working as well as they should be.