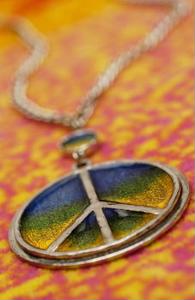 Not everyone phases out the cultural trends that were popular in their youth, and why would they want to? If you grew up in the late '60s or early '70s and you still hold true to the "hippie" values and lifestyle, perhaps you'd be inclined to make your bathroom decorative theme filled with tie dye and psychedelic patterns. You wouldn't be the first, as many examples of "hippie"-themed bathrooms appear throughout the internet.

Some of these hippie bathrooms require a bit of a time an energy investment, while others are as simple as installing a new shower curtain or getting yourself some tie dye bath towels.

There's a whole bunch of interesting hippie-themed accessories on various off-kilter sites offering quirky bathroom decorations. For example, one on VisionBending depicted a heavily-bearded hippie sitting in an Indian-style pose that encompasses almost the entire shower curtain. A similar product displays a massive smiley face wearing sunglasses with purple lenses and a flower next to its peaceful grin.

The same can be said for Squiddo.com - which features numerous bathroom accessories including shower curtain and waste baskets. You don't necessarily have to have lived through the hippie movement to appreciate the message and visual aesthetic of a peace sign, after all. There are also tie dye towels on the site, if you enjoy a little visual stimulation when you're drying off after a shower.

But if a simple accessory or two isn't going to satisfy you hunger for peace and love, Houzz.com offers some more substantially made over groovy bathrooms.

One that a caption describes as a "mud room" features wooden-themed decor, including a substantially-sized wooden basin, along with a wooden shower curtain, walls and bathroom vanity. At a glance, it almost looks like a bathroom from the Flintstones cartoon show, but it's natural ambiance recalls a camping trip where much granola was consumed and nature was gotten back in touch with.

Meanwhile, the first bathroom on Houzz's list is probably the most in-keeping with the idea of being psychedelic. The wooden design of the bathroom vanity and sink has a little bit in common with the so-called "mud room" we just mentioned, but the color scheme in the mirror frame seems to fit the more traditional idea of being groovy. The blue and grey scheme of the shower stall is also visually engaging enough to evoke fun times had during Woodstock.