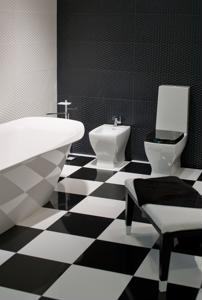 It takes different strokes to make the world turn, as the old saying goes. While some people presume decorating a bathroom can be somewhat of a chore, others have realized that any process that requires some creativity can be a good opportunity to channel their passions into.

Think about it - virtually anything a person is interested in could be incorporated into their bathroom decor. Take, for instance, some of the crazy bathrooms on display on Houzz.com.

Fans of relaxing afternoons at the beach could consider giving their bathroom a beach theme. It's clearly been done before. On Houzz, there's a bathroom with a breezy, blue- and tan-colored pattern happening with the walls and accessories. One circular mirror hanging above a different bathroom vanity looks like it was made of sea shells, while the tiles in another bathroom depicted on the site have been colored in such a way that a giant fish appears to be looming over the vanity.

This one might seem redundant - after all, every bathroom is water-themed, in the sense that water is incorporated into almost everything that happens therein. But if you find the image of flowing water, or simply the color light blue soothing to look at, you wouldn't be the first person to use water as an overarching theme for your bathroom. One room includes an "infinity tub" that appears to encompass the entire floor. Arguably, calling it an "infinity tub" could be a bit of an exaggeration, but nonetheless, it appears to be a profoundly relaxing place to take a bath.

On Walyou's list of crazy bathrooms, there are certainly some real doozies. Among these is one where the tile pattern is designed to look like a New York City subway map. However, the bathroom doesn't look much like the interior of most subway stations. While it depends greatly on what city you live in, a graffiti-themed bathroom on the site may reflect bathrooms you've encountered during subway trips more closely. It's not a "theme" exactly - it's more like the owners of the pub where this bathroom was found allowed their customers to scribble whatever they felt like on the walls. Such a bathroom might remind some of us of our younger years, when we weren't as concerned about keeping our bathrooms presentable. Luckily, these days we all have a much more refined definition of bathroom decor.