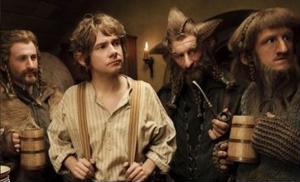 As the Oscars have recently transpired, it brings to mind the role that toilets typically play in the movie-watching experience. Namely, that if you're the sort of person who likes sipping a beverage while you take in the latest Hollywood blockbuster of your choosing, you're probably going to be hurting for an opportunity to skip over to the bathroom without missing anything too important to the plot.

Of course, there's a smartphone-related solution to virtually every problem these days, and the question of when to take a pee break during a movie is yet another question that new technology may be able to answer.

The LA Times and other sources have reported on the RunPee app - which gathers information on current movies, and tells the user which three- to five-minute periods in the film may be the optimal times to skip out without missing anything. It also provides a summary of what happens during those stints in the film, so if anything happens that may have a slight effect on the story, you'll be able to find out about it while heeding nature's call.

But it appears the manufacturers of RunPee have grander aspirations for their product. The app can also tell the user about the first three minutes of the film in case you're stuck in traffic or late for another reason, as well as quick reviews and links to IMDB and RottenTomatoes.com.

New app may be more necessary than ever

It might not be coincidental that this product has appeared on the market at this time in entertainment history. Not that long ago, The New York Post noted that Lord of the Rings director Peter Jackson must strongly disagree with Alfred Hitchcock's motto that "The length of a film should be directly related to the endurance of the human bladder."

Longer movies seem to be in vogue these days. The source points to several top movies from 2012, including the nearly three-hour long "Cloud Atlas" directed by the Wachowski siblings, plus acclaimed films like "Les Miserables" and "Zero Dark Thirty," which both break the two-and-a-half hour mark, as examples.

Some of these longer runtimes may be a result of high-powered directors demanding that they have the final say when it comes to how their films are edited, according to some experts the Post spoke with. On the other hand, many movies are three hours long simply because they deserve to be.