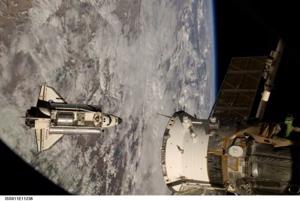 What's a toilet worth to you? Well, to some people, it's worth quite a bit of cash.

Take for example the toilets pointed out by The Most-Expensive Journal and CelebrityNetWorth.com. Many of the same toilets appear on both sites, which shouldn't be too surprising. While most millionaires aren't even willing to shell out thousands of dollars in order to relieve themselves at the height of opulence, these individuals are certainly out there, few and far between though they may be.

The priciest commode on both lists isn't technically for sale to individual homeowners. However, should earthlings ever make their first contact with life from other planets, the aliens may get the impression that the average human is far more well-off than is, in fact, the case. That's assuming these E.T.s stumble across astronauts working on the International Space Station, where the toilet cost a gargantuan $19 million to construct, according to the sources.

The space station's super high-tech facilities haven't always proven to be worth the price tag, however. It's broken down a few times in recent years - in 2008 according to Fox News, and once again in 2009 according to AP. As if living in outer space wasn't stressful enough without having a comfortable place to heed nature's call. And the 2009 fiasco was a particularly sordid ordeal, as the space station was housing more astronauts than it ever had in past. A total of 13 people sharing one bathroom in such closer quarters certainly had to be extremely inconvenient.

Dagobert toilet is literally a throne

Meanwhile, talk about taking an old expression literally - the French-made "Dagobert" toilet, also appearing on CelebrityNetWorth and Most-Expensive, looks quite a lot like it was pulled out of a King Arthur film or some other tale of medieval daring do.

The website of the manufacturer - Herbeau - elaborates that the toilet is adorned with Moustier Polychrome paintings and is advertised to "delight even the most jaded Royal."

Most-Expensive explains that the more than $14,000 toilet was christened in honor of 8th Century Merovingian dynasty ruler King Dagobert, and it plays his unofficial theme song - "Le Bon Roi Dagobert" - whenever anyone pulls open the lid. Upon flushing, a ringing sounds alerts servants - should the owner have any servants - that they've got some extra work to do.