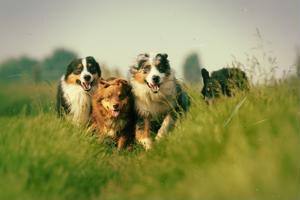 In a public policy move likely to raise a few eyebrows across the People's Republic of China, officials from the Luohu District in the city Shenzhen have decided to install public toilets for dogs, according to the Nanfang.com. Originally, the Chinese Shenzhen Special Zone Daily broke the story.

The Huffington Post explains that the pet restrooms will be located near parks and sidewalks and consist of approximately 10 square feet of sand. The news source reports that 80 of these de-facto bathrooms have already been implemented, and there are talks of installing 1,000 more.

These doggie bathrooms are being set up as part of a larger campaign to improve civility in Shenzhen. Fines will be levied to those who allow their canine companions to relieve themselves outside of the new bathrooms without cleaning up the mess. Several other "uncivilized" public actions will also result in a fine under the new set of regulations, including spitting, littering and smoking in officially designated non-smoking areas.

Nanfang.com compiled a handful of reactions Shenzhen residents voiced on the web. One commentator wrote that dog owners - not the government - are to blame for the excessive amount of pet waste in the streets, because dog owners are "selfish and immoral." Contrasting that attitude, a GlobalPost reporter stationed in Hong Kong said these new laws and facilities are showing that "China is, as in many other respects, becoming like the developed world in its intense - and widespread - fondness for pets."

While some people might second guess the practicality of public bathrooms for dogs - we imagine only the most well-behaved and trained pooches would know to use the specially designated area - many cat owners would agree that not enough attention is paid to bathroom decor for cats. Specifically - improving the luxury and appearance of the litter box.

Perhaps the majority of cats will be satisfied with a plastic bin full of fresh, clean littler. But for those felines with more expensive taste, Apartment Therapy compiled a list of favorite fancy litter boxes. One called "The Pet Loo" is meant to recreate the sensation of walking around on grass, and includes a material that's designed to reduce the often unpleasant aroma of cat urine. Other littler boxes resemble ordinary pieces of furniture, and could seamlessly fit into the surrounding decor.