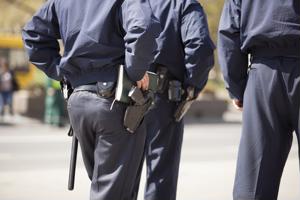 Most of us can relate - we've all left a phone or an umbrella or another accessory on a public bathroom vanity now and again. One unfortunate, nearly 30-year veteran of Massachusetts law enforcement has been penalized for absent-mindedly leaving his gun behind after a trip to the loo.

According to Fox News, Capt. John Rogers Jr. has been suspended for 20 days, denied 30 days pay, and must undergo training sessions about the correct way to handle weapons.

“He has always presented himself in a professional manner and is a well-respected law enforcement officer in the area,” Chief Michael Botieri of the Plymouth Police Department said in an announcement. "Capt. Rogers has taken full responsibility for his actions and has never been disciplined over his entire career. He also recognizes that his behavior warrants severe disciplinary action."

Officer.com reports that Capt. Rogers's revolver - which was dropped in a Wareham Court House bathroom - was lifted by someone who was in court that day. It was recovered two days after its disappearance.

We don't address bathroom ceilings too often during our investigations into bathroom decor, but maybe we should. News sources are reporting that one bathroom ceiling in Detroit may have helped prevent an accused law breaker from fleeing capture.

NBC News reports that a police prisoner who was being kept at St. John Hospital inadvertently trapped himself in a wall during an attempt to break through the ceiling and escape. A spokesman from the hospital didn't tell the news source what the patient had been accused of or why he had been institutionalized, but assured reporters that he male was "quickly located and apprehended by law enforcement."

In a story that was surprisingly widely reported a ribbon cutting party took place in commemoration of the opening of renovated bathrooms at a Brooklyn public school.

According to a feature story from an ABC News, the bathrooms at P.S. 124 Park Slope were way behind on already-paid-for renovations as recently as October. At that time, the girls' rooms lacked doors on the stalls. Since then, they've been updated with new sinks and toilets that are low enough to the ground for kids to use them easily, which didn't used to be the case.

"It's like winning the lottery. It sure is. We're very happy to have these brand new bathrooms for the children," the school's principal Annabell Martinez told the news source.