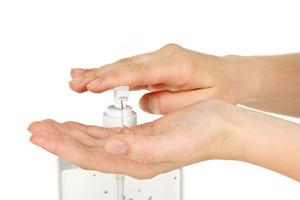 Almost everyone knows that the hygienic thing to do after a visit to the bathroom is to give your hands a thorough soaking. Some of us may blow off washing our hands now and again - perhaps while in a hurry or when simply not paying close attention to our surroundings. But according to the U.S. Centers for Disease Control and Prevention (CDC), cleaning your hands in a bathroom vanity sink is far more important than some people might assume. In fact, the agency states that lives could be saved.

The CDC explains that hand washing halts many contagious diseases from spreading in typical environments - including the home and workplace. It's also recommended that hand washing occur in many instances unrelated to the bathroom, such as before and after food preparation, eating, touching a sick person, treating a cut, changing diapers and touching an animal or garbage. If soap doesn't happen to be on hand, an alcohol-based hand sanitizer could do the trick so long as its at least 60 percent alcohol and hands are wet when the sanitizer is applied.

In a trial overseen by chief medical editor Richard Besser, M.D., to see whether a natural hand sanitizer got rid of as much E. Coli bacteria off participating hands as an alcohol-based product, the alcohol-based sanitizer was shown to be significantly more effective. The E . Coli used in the study was a strain of bacteria that wouldn't cause illness, reported the news source.

Interestingly, anti-bacterial soap did away with about as much bacteria as regular soap. But it was found that 20 seconds of hand washing is necessary for any of these products to be truly effective. A five second rinse, the report states, won't be enough.

Even astronauts make sure to wash their hands

If you need more evidence that smart people make a point to wash their hands, look no further than International Space Station Commander Chris Hadfield, who demonstrated how he and his fellow space travelers wash their hands in zero gravity during a Q/A. As reported by Geek.com, astronauts are supplied with with bags of soapy water called "No Rise Body Bath." Quite unlike the experience of washing hands in a sink, the floating balls of water must be grabbed out of the air once they're squeezed out of the bag.