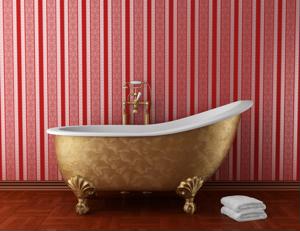 For some people, there's much, much more that goes into designing a bathtub than providing a place for people to lie down in and get themselves nice and clean. It would seem that some designers create unusual bathrooms out of creative impulses, while others are implementing modern technology in fun and innovative ways. Others even apply both art and science to their next generation bathtubs.

Perhaps the most creative bathtub found on Melodyhome.com's set of eccentric tubs is a lavish bit of furniture designed to resemble a giant, elegant high-heeled shoe. The source explains that this device was created by Italian decor master Massimiliano Della Monaca. It's adorned with a grey pattern featuring butterflies on the Melodyhome website, but apparently comes in other designs. The site also features a bathtub made in the likeness of a small boat, for those who would like to transpose their love of aquatic adventures into their personal hygiene routine.

On the opposite end of the aesthetic spectrum - though likely not the price-range - is a stone bathtub featured on Techeblog.com's set of off-kilter bathtubs. A giant rock hollowed out with a faucet attached, this product of the Stone Forest  company wouldn't look out of place on an episode of the Flintstones, although a person could likely enjoy a bathing experience far beyond what was available during the real Stone Age. Stone Forest also makes sinks in a similar style.

Also viewable on the Techeblog are a neon-green LED bathtub you could envision the little grey men from the X-Files enjoying a relaxing bath in, as well as an ultra-futuristic "Red Diamond" bathtub. The source speculates that it might be the most expensive bathtub in the history of bathroom decor, and it includes a pair of high-definition television screens - possibly so two people taking a bath together can view different television programs if they have a disagreement about what they'd like to watch.

But an even more elaborately futuristic bathtub, despite its a minimalistic appearance, is the i-Sopod tub shown on Homeartblog.com Largely resembling a giant egg, it's tricked out so a bather will be totally isolated inside once they close the lid. The lights inside are programmable, so people can choose for themselves whether they'd prefer to bathe in a bright environment, under dim lighting or in the dark.