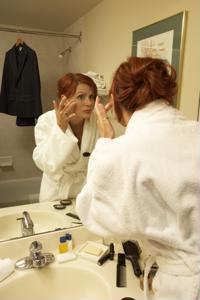 Here's some information that might blow the mind of many people who travel regularly - a study has found that if you have to eat a meal in a hotel room, you're best bet for sanitation is to eat it in the steam shower.

According to research released by the hotel consumer advocacy group Check Safety First, as reported on by the U.K. Daily Mail, the relative light units (RLU) researchers used to determine how much potentially harmful bacteria was present on average in the bathrooms they examined showed that the typical hotel lavatory's sinks contained 535 RLUs. Meanwhile, the toilets displayed less than 35 RLUs, and showers generally had less than 45.

Now, let's compare this to some of the objects typically found in hotel bedrooms. The news source reports that the agency usually found about 128 RLUs on TV remote controls, more than 200 on telephones, over 125 on light switches and more than 60 on door handles.

This means that, much of the time, you're better off eating your dinner while sitting on the toilet than you arewatching TV.

"People often associate illness and their stay with the hotel food, but our auditing finds that the room can also be a major cause," the chairman of the organization, Steve Tate, told the news provider. "With a high turnover of hotel cleaning staff, maintaining high standards is difficult, with some of the most reputable hotels not living up to these standards."

Some good news about hotel bathrooms

But not all the hotel bathroom-related information coming through the news wire sounds scary. In a more encouraging article, USA Today pointed to some of the best bathrooms in Las Vegas hotels.

The majority of things that happen in Vegas, you'd probably prefer stay in Vegas. But such is not the case with these luxury bathrooms, which many visitors to the City of Sin may want to take home with them. The Mandarin Oriental is at the top of the news source's list. Though the name of the hotel may be considered antiquated - even a little inappropriate - by today's standards, there's certainly nothing inappropriate about the polished wooden floors and raised basins in its bathrooms. Third on the list is the Venetian Report Hotel Casino, with bathrooms that include walk-in glass shower stations and gold-framed oval mirrors.