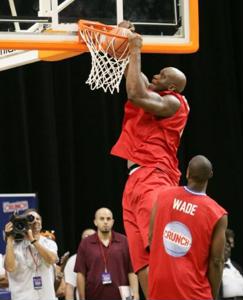 Famous people are just like you and me - they take showers, floss and brush their teeth in front of their bathroom vanities just like all human beings must. However, they often do so in far-more luxurious bathrooms than many people could ever hope to afford.

Take, for instance, the lavatory of former NBA great Shaquille O'Neal, which appears in a compilation of pictures of celebrities' bathrooms on the website Bath Tubs and More. As Shaq is noted for being very, very tall it could be assumed that his bathroom  has higher ceilings than most. It's also got windows circulating the room, to give anyone inside a nice view of the backyard of Shaq's estate.

But if you're looking to be impressed by sheer elegance instead of size, look no further than Jenny Craig's bathroom, featured on the website of Home and Garden Television (HGTV). Under a domed ceiling, Craig's selected a classical painting and a fireplace as objects to install beside her bathtub. Next on HGTV list is a decisively modern bathroom design from the New York home of Oscar nominee Julianne Moore. Although the celebrated actor - whose credits include major supporting rules in "The Big Lebowski," "Boogie Nights," and "The Kids are All Right" - also includes a fireplace, it otherwise projects a far sleeker, more contemporary look with a soaking tub in the middle of the room. Strangest among the list that appears on HGTV is the bathroom of noted golfer Phil Mickelson, whose shower stall appears to be a teleportation chamber from a science fiction film.

Meanwhile, while some people have mocked Nicolas Cage for his somewhat goofy performances in films like "The Wicker Man," no one would ever give him any flak for the bathrooms in his multiple mansions, as displayed on Bathtubs and More. One features walls of marble with a pattern that looks like red and purple cracks, while the other one is even bigger than Shaq's bathroom, if you can believe that.

Contrary to what some people might expect, "Genie in a Bottle" singer Christina Aguilera's bathroom is extremely minimalistic compared to some other celebrity bathrooms. Although, the view from the window is a picturesque image of what appear to be tropical trees on the horizon. Unexpectedly, this might be one of the few things Aguilera has in common with "Antichrist" star Willem Dafoe - the shot of his bathroom appearing on the web source somewhat resembles a jail cell with a gorgeous forest view.