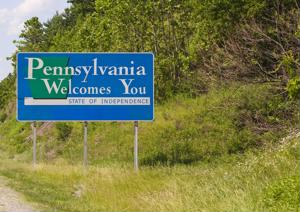 Virtually all of us have found ourselves in this situation - you wander into a public restroom hoping to comfortably relieve yourself, only to find some scoundrel has overloaded the toilet with bathroom tissue, deliberately clogging it and rendering it useless to people in need. According to the Republican Herald, this was an ongoing problem at a high school in eastern Pennsylvania. School officials, not content to sit back and allow vandals to ruin the bathroom experience of others, decided to take a stand.

"We have a case pending with the police where a bathroom down by our gymnasium was absolutely destroyed," announced Mahony Area High School principal Thomas Smith, during a school board meeting, according to the news source. "I'm sure [the district facilities director] could tell you the times that our toilets have been jammed with toilet paper and other papers. ...After we took the toilet tissue out of there, people were throwing books."

In order to obtain toilet paper, male students at Mahony Area High School have to sign out a roll from the office, and sign it back in after they've concluded their business. The principal said this policy has curbed the wanton wrecking of bathrooms, although some parents have expressed umbrage with the course of action school officials have taken.

The policy may have down sides. At the board meeting, one students' mother said that some boys have preferred to fake sickness and return home in order to avoid the embarrassment of having to ask an authority figure for a roll of toilet paper. She also asked why students were only allowed to use the restroom during the first five minutes of each class. Superintendent Joie Green responded that this policy is intended to reduce the amount of loitering in the hallways.

In Penn., bathrooms have grown in popularity since '30s

Meanwhile, while some statistics show that owning a cell phone is more common than enjoying access to a household toilet in India, similar circumstances may have existed in parts of the U.S. as recently as less than than 100 years ago.

According to findings compiled by Public Opinion online, based off the 1933 Pennsylvania Department of Agriculture farm report, radios were almost twice as prevalent as toilets in Franklin County, Penn., at that point in time. Even though 730 homes already had access to indoor plumbing, only 370 of them had installed an indoor toilet, compared to 720 who had invested in what was then the latest entertainment technology.