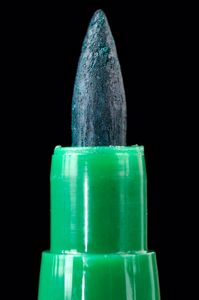 Scribbling humorous messages on the walls of public bathrooms is a time-honored, worldwide tradition. While some people abuse this custom and write shocking, obscene messages that are often unfunny or mean-spirited, it's not unheard of to catch a glimpse of a genuinely amusing limerick.

While we certainly don't encourage readers to use public toilet stalls as their own personal billboards - that makes life more difficult for already hard-working custodians - news sources have collected some of their favorite bits of graffiti.

"Since writing on toilet walls is done neither for critical acclaim, nor financial rewards, it is the purest form of art - discuss," reads one especially thoughtful bathroom wall message highlighted by msnNOW. The source explains that while professional advertisers spend countless hours trying to think of ways to make their advertisements stick out in viewers' minds, bathroom wall scribblings are sometimes the most memorable sites we'll see during the course of an average day.

Another example MSN points to is a haiku about waking up in the morning, which is simply the word "no" repeated 18 times. At another bathroom that lacked a mirror above the sink, someone wrote in large black letters, "YOU LOOK FINE." Other bathroom wall messages have multiple writers correcting each other's grammar, while possibly the most direct thing written on a bathroom wall noted by MSN simply reads, "I wrote on this wall. Take THAT society!"

Bathroom graffiti goes to the next level

Many people may not realize that entire websites are dedicated to collecting pictures of the funniest bathroom wall ramblings they can find. While some favorites of FromTheBathroomWall.com are somewhat crass, others are quite witty.

"Satin Rulez!" wrote one genius, around a pentagram star sometimes linked with Satanism. "Well...It's a nice fabric and all, but I don't know if it rules..." responded another passerby. On a different wall, someone wrote a seemingly complex algebra equation. Next to it appears the clearly frustrated retort, "I was told there would be no math!"

But, ironically, the most important lesson readers should take away from this examination of bathroom wall graffiti shows up a ways down the FromTheBathroomWall website. Some presumably well-intended person wrote "WWJD" - meaning What Would Jesus Do. Later, someone wisely noted, beside the abbreviation, "He wouldn't vandalize bathroom walls."