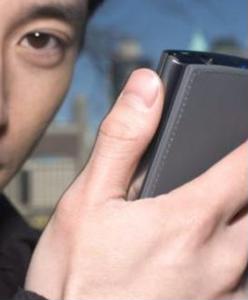 In the land of The Rising Sun - where a motorcycle toilet and a toilet that doubles as a master soccer goalie have been unleashed on an unsuspecting population - a new commode with special features that are remotely controllable via smartphone has been announced by the company Lixil.

According to GeekOSystem, these Satis toilets will be available for sale in spring and will be able to play music and flush with the touch of a button on users' Android phones or Bluetooths. People will also be able to open and shut the toilet's lip and keep a "toilet dairy" that will monitor the frequency and style of toilet use. Then, based on this information, you can calculate the expected portion of your monthly water and electricity bill attributed to what's been happening on the commode.

"Hopefully this will catch on in America," commented GeekOSystem writer Glen Tickle. "Or at the very least, someone please invent a way for me to flush public toilets with my phone instead of having to do that thing where you push the handle down with your foot."

Japan is the Land of Toilet Innovation

For some mystical reason, Japan has pushed the envelope for futuristic toilet technology like no other nation. Many of the most bizarre sci-fi-style toilets have been manufactured by the company TOTO. The minds behind the popular Washlet toilets - which feature heated seats, courtesy noises, and other practical features - also created a motorcycle that runs on, according to TOTO's official website, livestock waste and household wastewater instead of gasoline. Because TOTO designed the seat of the Toilet Bike Neo to resemble a toilet in order to make a statement on environmental conservation, some have mistakenly assumed the bike runs on human waste. Not unlike TOTO's soccer goalie toilet, the Toilet Bike Neo does not actually function as an ordinary toilet.

Contrary to what you might first assume, the thinking behind the "Toilet Bike Neo Project" isn't based entirely in novelty or sheer ridiculousness. According to the news provider Tofugu, these motorcycle toilets were designed to save fuel in light of 2011 earthquakes and tsunamis that led to the deactivation of many Japanese power plants. TOTO johns from the The Toilet Bike Neo Project may also include eco-friendly LED lights and, more mysteriously, the ability to talk.