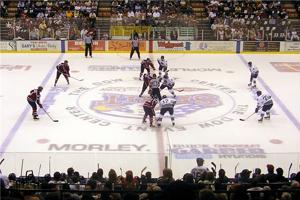 Ontario resident Jim Vigmond came to an auction hoping to purchase a 1967 Stanley Cup banner, and he left with a toilet. Not that he's complaining.

112 items leftover from Maple Leaf Gardens - the erstwhile home of the Toronto Maple Leafs - were recently auctioned off by the Frozen Pond memorabilia firm, according to CTV News. In addition to the Stanley Cup banner, items in the assortment of artifacts from the hockey area's history included old pictures, the penalty box, locker room doors and the toilet. These were all originally possessed by a private collector and had cost him a grand total of $400,000.

Vigmond started bidding on the toilet after the Stanley Cup banner began looking like it was going to go beyond his price range. But he wasn't the only person interested in the toilet, the event's organizer told CTV.

“It’s filthy, it’s disgusting, and everyone is interested in it,” Hersh Borenstein told the news source.

After he successfully acquired the toilet, the 55-year-old Vigmond's friends didn't know what to make of his actions, according to the Canadian Press.

"They thought I had money to burn, and surely there was something that I could have better spent my money on," Vigmond told the news source. "They've got a point. But it's a part of an icon. I just thought, 'what a rare piece and just think of all of the people that have spent time contemplating in that dressing room what lies ahead of them.'"

In a follow-up interview with The Grid, he said his wife has requested that that the toilet be buried in the backyard of their home. However, he plans to add it to a sports memorabilia and cigar smoking room, where it will be placed near a directional sign he also bought at the auction. His major concern, he told The Grid, is what he'll do to keep intoxicated house guests from assuming the historic toilet is connected to any plumbing.

When asked if he was excited about the prospect of sitting on a toilet that had been touched by the backsides of so many famous athletes, he responded to the source with a resolute affirmative. While confirming that he would smoke a cigar and sip on some aged scotch, he declined to answer whether or not he plans to wear pants.