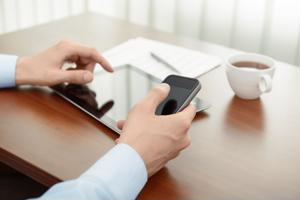 Nothing's worse than when, soon after purchasing a sleek, portable modern gizmo that takes phone calls, goes online and can provide any number of other conveniences through downloadable applications, you accidentally drop or knock your smartphone into the toilet.

A new study from Squaretrade indicates that this scenario is quite common. Almost 10 percent of all mobile-tech gadget-damaging episodes reported to the electronics warranty company happened via an accident involving the toilet, while more than 15 percent occurred somewhere in bathrooms. Presumably, that leftover 5 percent of accidents involved the shower or the sink.

In addition, almost 20 percent of damaged smartphones incurred their mishaps in living rooms, while more than 20 percent occurred in kitchens. Not surprisingly, more than 40 of all smartphone accidents overall involved water, which was either spilled on a mobile device or the final destination of a fall from its owner's hand.

An older study from SquareTrade estimated that damage to mobile devices have cost Americans almost $6 billion since 2007 - more than double what the U.S. annually spends on toilet paper. Accidental damage to a smartphone, the organization says, is 10 times more common than theft or permanent misplacement of a smartphone.

Worst case scenario for when a smartphone meets a toilet

As part of a write-up compiling particularly bad scenarios involving damaged or destroyed smartphones, ABC Action News reciting the tale of a photography producer whose iPhone 4 was dropped into a toilet by her 1-year-old offspring.

"I'm trying to pull it out before the phone is 100% damaged, trying every tool known to man as fast as possible," the producer, identified only as "Amber," told the news source. "The 1-year-old is jumping all excited at the show, screaming because she wants to play with me in the toilet."

After buying a new smartphone, due to her lack of eligibility for a replacement, the producer said she opted to shell out for a $90 waterproof case. This decision may have been spurred by the fact that this was the second smartphone Amber had lost due to a water-related mishap - the first involved getting pushed into a pool.

ABC notes that if a smartphone or an ordinary cell phone does fall into the toilet, giving it a thorough drying with paper towels and plunging it deep into a container of dried rice may bring it back to life after several hours of submergence.