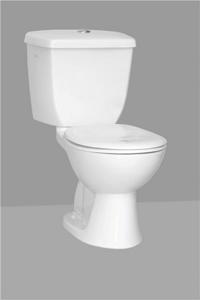 It was pretty much the worst case scenario for anyone who's ever been on his or her way to use the toilet.

On Tuesday, October. 16, a 58-year-old Harlem man, who is not named in a report from the New York Post, was in critical condition at St. Luke's Hospital after plummeting from his second floor apartment after his bathroom floor fell out from under him.

"He told me, 'Felipe, I think I'm going to die,'" 19-year-old Felipe Pena told the news provider. Pena responded to the victim's pleas for assistance, along with two construction workers. "I said, 'No, no, no, if you die, how are you going to get the money when you sue the (expletive) out of them?' He was lying on the floor full of blood. He said 'Hold me, Felipe.'"

Speaking to the Post, a representative from the Department of Buildings (DOB) said that, due to a renovation effort, the only things supporting the floor at the time of the incident were rotten beams. The DOB was looking into whether proper permits were in place for the construction.

As he was being taken to the emergency room, the victim berated the building's super, claiming that he had repeatedly told the maintenance worker about the excessively wet floors in his bathroom, according to the news source.

As disquieting as that story from Harlem is, a downright terrifying scenario unfolded in a Ghana suburb in late September, according to the Daily Guide.

As at least six men engaged in their natural businesses in a 28-seat public restroom, the facility collapsed, trapping them in a chasm of septic muck. A neighborhood rescue team managed to dig five of the victims out of the mess, but they were unable to rescue 55-year-old James Kojo.

The news source goes on to quote Charles E.A. Koomson, coordinator for the National Disaster Management Organization, who said potentially dangerous dilapidated public facilities such as the one that ended Kojo's life should be torn down, and government agencies have designed regulations for new public restrooms.

According to the Daily Guide, methane gas emanating from septic pits has been known to occasionally result in these collapses. The government sources told the news provider that new restrooms will be designed without the cesspit directly connected to the facilities.