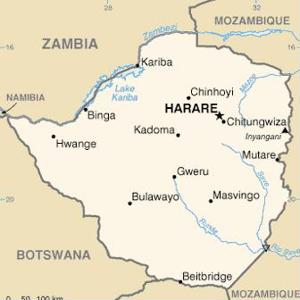 Synchronized swimming is a classic Olympic event that beautifully blends gymnastics, dance and aquatic acrobatics. Swim-capped, goggled ladies gracefully swing their arms, legs and bodies around in the water in a spatial ballet that involves about as much mental practice as it does physical prowess. As with any synchronized sport, timing is everything. Which is why if Zimbabwe pulls off the great flush of 2012, it may just be the leading competitor when synchronized flushing hits the Summer Games in 2016.

In Bulawayo, Zimbabwe's second largest city, Mayor Thaba Moyo and city officials have asked that residents converge to flush their toilets at the exact same moment. The first synchronized flush has already taken place, and the second is scheduled soon. Why all this flushing?

Bulawayo has been suffering a lack of water for ages, following severe droughts and poor plumbing maintenance throughout the city. According to the BBC, Bulawayo's "big flush" will attempt to keep pipes wet and help avoid clogging. Is it sensible? Some civic activists are calling the endeavor "ridiculous" according to Businessweek's website.

"Our leaders are a joke," one Zimbabwean man told the BBC. "What they should be doing is finding money from donors to buy new sewer pipes."

Donors may be a stretch, but surely the council workers reportedly visiting townships and warning residents of fines for not taking part in the synchronized flush could round up a bit of spare change.

Now that the initial flush has taken place, the BBC reports that most of the million residents of Bulawayo did actually flush on the hour. Whether it works or not, only time will tell.

Activist organization leader Magondonga Mahlangu told the Associated Press that the citizens of Bulawayo have enough going on in their lives and don't need a mandatory evening flush to get in the way. Unemployment and poverty are much more real issues than trying to keep pipes wet and unclogged.

"It just goes to show that someone in the council has lost touch with the real issues on the ground and is failing to deal with real problems," she told the source.

Still, Zimbabwe's toilet situation is much better off than the majority of Africa, where flushable toilets - much less any running water - are extremely scarce. Want to reduce your own water waste in the bathroom? Investing in an eco-friendly toilet may not have the grandiose implications of city-wide synchronized flushing - but it's guaranteed to work!