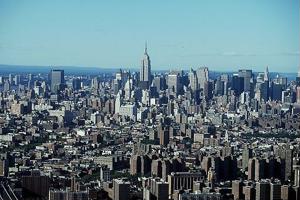 New York's Standard Hotel has hidden perks, like voyeur-equipped bathrooms. These aren't just any voyeurs however. The folks watching you brush your teeth, urinate and worse - they are the entirety of New York City.

The Standard hotel has instituted a number of new bathrooms, all of them equipped with the usual necessities (toilet, vanity, soap) and lacking one primary one - privacy. The loos all look out on the street, offering a gorgeous view of the city. The problem is, the city looks back.

"The view outside is exciting, but the view inside is frightening," Melbourne native and hotel guest David Langdon told the New York Daily News. "I saw people waving at me. Sitting on the royal throne, you don't expect a public viewing."

The giant windows of the Standard's Boom Boom Club restrooms aren't one-way glass, frosted or even curtained. They're just 18 stories up, and not high enough to avoid attention. Or the camera phones of passersby.

The Standard, which sits near the High Line Park in the meatpacking district of Manhattan (there is another Standard in the East Village, although the boutique hotel chain got its start in Los Angeles - news which surely won't surprise any New Yorkers) is no stranger to nudity. Over the years, its giant windows and friendly policy toward public voyeurism has been remarked on a number of times. Local and abutting businesses (not to mention residential housing units) regularly get a glimpse of couples in affectionate states of expression, as well as some racy videos and one incident involving a trampoline that was noted by a number of sources.

So, is the Standard really that much racier than the Waldorf-Astoria, or is it just the habit of folks to play Jimmy Stewart and give new meaning to the title Rear Window? Certainly enough people on the street were snapping pictures to imply the latter.

Regardless, the Standard is taking the several complaints - and plenty of press - seriously, insisting that the bathrooms were meant to be equipped with "black, waist-high curtains," which, according to the source, a manager said "had always been part of the design and were just temporarily removed."

Well, regardless, all those bathroom users certainly got their turns to shine in the smartphone camera spotlight. Thank goodness for newspaper mosaic filters.