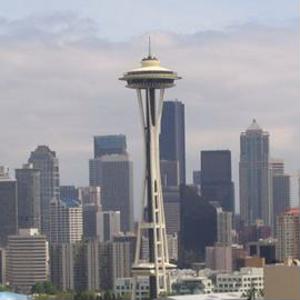 When most of us think of Pike Place Market, it recalls that famous Starbucks roast named for the iconic open-stall bazaar where the Seattle company got its start. For Shahrukh Pestonji, however, the words cull up little more than the queasy bitterness of too much coffee on an empty stomach. When the Toronto tourist took to the famous market with his family, he discovered the dark underbelly of the Pike Place bathrooms - the stall doors are kind of short.

As Pestonji sat doing his business, an estimated two dozen people passed through the restroom, some of them making eye contact. Pestonji failed to comment whether there were any commiserating glances, but he did give The Seattle Times a mouthful.

"You're sitting on the toilet with your pants around your ankles and people are peering over at you - that's not very pleasant," Pestonji told the source. He called his experience "absolutely degrading, humiliating, disgusting," and politely opened up the topic to new adjectives by adding, "whatever you want to call it."

"Safe" might be Kelly Lindsay's choice. The Pike Place Market director of programs and marketing who dealt with Pestonji's email told the Times that she'd heard previous complaints about the stall doors, but their (completely lawful) awkwardness was a necessary evil.

"It's a safety precaution," Lindsay said. "The door height is a deterrent to unwanted activity in the restroom stalls."

In response to this, Pestonji said that there has long been a restroom design feature protecting against unwanted stall activity. It's the gap between the door and the restroom floor, where, he said, belying his previous specificity, "you can see the legs of people or something."

It's pretty much a guarantee that no public toilet will be as cushy as your home bathroom, but does the Pike Place Market owe Pestonji an apology or, much less, a toilet remodeling? Lindsay says that the market has no intentions to replace any of its stall doors, and it's true that a public toilet facility should focus on safety in its bathrooms above all else - even if bowel movements and social comfort suffer as a result.

At the very least, Pestonji has made his qualms known and widely read across the internet, proving that if one thing isn't given short shrift, it's the media's love of a good toilet yarn.