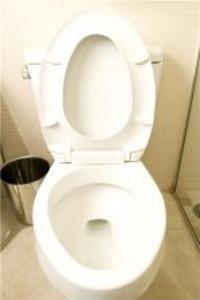 Suwon, a city just outside Seoul, has long been pioneering the importance of toilets. Rather than grudgingly accepting its position as the home of toilet innovation - because some city had to be - Suwon has embraced everything about the iconic porcelain bowl. So much so, in fact, that the former mayor, Sim Jae-Duck, had for years gone by the pseudonym Mr. Toilet. And why not? Sim Jae-Duck was the founder of the World Toilet Associations (an international group dedicated to toilet sanitation), redefined toilet and restroom quality in Korea, built a toilet-shaped house and was even supposedly born in a bathroom!

When Sim Jae-Duck, a.k.a. Mr. Toilet, passed away in 2009, his home was donated to the city and has since been reopened as a public park and museum - what Korea has declared is "the world's first toilet-themed park." So far, no one has risen to dispute this.

Inside and surrounding Mr. Toilet's house are a plethora of porcelain thrones, international bedpans and murals and sculptures of the sort of bathroom activities you'd expect going in. Changing tables, histories of latrines, fun feces facts and dioramas are interspersed with chamber pots, a series of thatch and straw outhouses (occupied by bronzed statues caught in the act) and even what appears to be a quiet sand garden with a very odd - if thematically appropriate - sculpted stone centerpiece.

However, for all the pomp, circumstance and bathroom humor, Sim Jae-Duck's legacy is an important one. His crusade for cleaner bathrooms and sanitary commodes is more than a quirk or even luxury - it's an essential part of modern society. Many undeveloped and developing countries suffer egregious disease and sickness due to lack of proper sanitation. Even Korea has been noted for the poor quality of its public restrooms before Sim Jae-Duck took the initiative to make a change and restore the country's national pride in its lavatories.

Sim Jae-Duck was more than privy to the desires of his city and country for cleaner bathrooms - he was cognizant of their need for health and sanitary safety. If the legend about his birth are true, the one thing about Mr. Toilet's legacy that becomes clear is that he was certainly born into it.