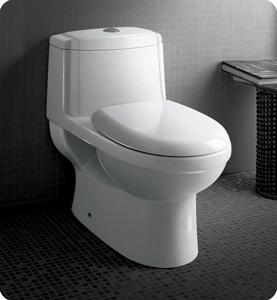 People have delivered children in a variety of places. Traditional locations include hospital rooms and taxi cabs (often during traffic jams and on the way to the hospital rooms). Once upon a time, everyone gave birth at home. New trends are popularizing birthing pools. But one of the least popular options is usually not an option at all - just random coincidence.

When a young, anonymous mother started giving birth in a toilet stall at a Shanghai mall, shop clerks, customers and sanitary workers rushed to her assistance after hearing the cries of sudden labor pains. Though an ambulance and medical team were called, the woman gave birth in the mall bathroom with the assistance of the various good Samaritans who showed up.

Somewhere in here is a great satirical social commentary.

"One worker helped by holding the baby carefully in her hands, while she was still attached to her mother via the umbilical cord," a security staff member told the Shanghai Daily in detail. "And others called an ambulance."

While the mall restroom is a poor place to give birth, westerners might find it an uncomfortable place to even use the toilet. In Shanghai and many other Chinese cities, restrooms are usually stocked with squat toilets or troughs that make tiny European models look positively luxurious by comparison.

While hotel and airport toilets are in solid shape, it's rare to find a western-style porcelain bowl once you're in the city. Public toilets are almost always squat basins with little to no toilet paper and antiquated plumbing systems. Expect startling hygienic conditions as a traveler abroad. Chinese public toilets are not famous for their decorum.

So you can imagine that being born in one might not be the healthiest or most noble of births. But it seems that the mystery young woman and her infant have made it through just fine. Following the mall debacle, the mother and child were carried by ambulance and admitted to Shanghai First Maternity and Child's Health Hospital, where both were declared healthy by doctors.

While what could have been a major health risk turned out okay for the mother and child, with any luck, the restroom situation in Shanghai and China's many provinces will improve with time. Not just for hotel guests caught needing to pee while out on a day trip, but for the many citizens who still lack the essential plumbing to maintain a healthy habitable home.