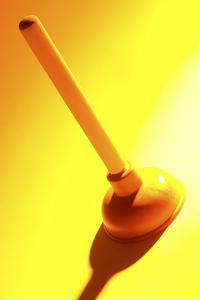 Clogged toilets are guests' worst nightmares. It seems like everyone's toilet is capable of handling only a certain amount of toilet paper and...ahem...waste before it suddenly decides to protest and start flooding with water, and you never know what that limit is. While a plunger is the best case scenario in this circumstance, as it can quickly and quietly get rid of a clog while you're hoping that no one's noticed how long you've been in the bathroom, some households aren't forgiving enough to offer them. So what else can you do?

First, put a stop to that constant water flow that's threatening to spill over and flood the bathroom. According to ArtofManliness.com, you can do this by quickly removing the tank's lid and closing the toilet flapper. This will prevent water from heading from the tank into the bowl. You'll at least be able to keep the process of unclogging the toilet relatively clean.

Now that there's no flood warning, you're free to get creative with other unclogging methods. The easiest thing to try, if the clog is a relatively small one, is to pour in some hot water. Head over to the vanity and look for a container that's capable of holding a significant amount. When the water in the toilet is at its lowest point, pour in the hot water from as high as you dare without making a mess. The pressure should dislodge the clog, but you may need to do this more than once. It won't work, however, if the clog is a big one.

If you have a bigger clog, there's pretty much no way you can unclog it without a plunger AND without alerting your host to the problem. You're going to need tools to get the job done, which may not be readily accessible. This could be a toilet auger, which you simply snake down into the hole and wiggle around to loosen up the clog.

You could also use a combination of baking soda and vinegar, which TLC points out has been known to unclog drains, so it could work with a toilet. As long as there isn't a lot of water in the bowl that could dilute the mixture, you may find this method successful.

Next time, be cautious by flushing a couple of times while you're using the toilet rather than waiting until you're finished. This could save you some embarrassment.