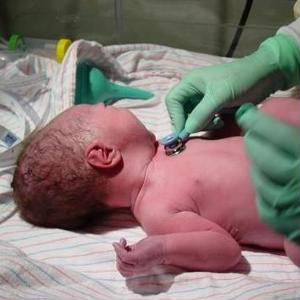 When you walk into a bathroom, you're probably not giving much thought to the stability of the floor. While your eye might take in the bathtub, vanity and other bathroom accessories, you're not likely to notice anything about the ground other than maybe the color of the tile. Perhaps that's why one English woman found herself falling 10 feet through the bathroom floor into her kitchen - with a baby inside of her.

According to The Daily Mail, the woman and her husband had moved into the home two months before the accident and were renovating the bathroom to make it more suitable for the new baby.

"There was nothing but plasterboard and joists and I must have missed a step and fell through to the kitchen," she said.

At 35 weeks pregnant, the woman fell right through the floor of the second-story bathroom and hit her feet on the breakfast bar in the kitchen, bouncing off onto the floor. While she initially thought that her back was broken, she soon found that she was just winded and a bit bruised - but discovered that her water had broken and that she was in labor.

Her 2-year-old son was the first to discover her in the kitchen, screaming as the woman's father raced down from the bathroom, where he saw her fall right through.

"I thought the worst when she disappeared through the floor - that she could have been paralysed, or even died," said her father.

Luckily, the paramedics were called and the woman was rushed to Queen's Medical Centre in Nottingham, where she was quickly admitted to the maternity unit, reports Mirror News. While there was much concern about whether her baby was alright, she successfully gave birth via C-section to a son who weighed just over 4 pounds.

Although the baby developed a lung complication and is in the intensive care unit, his mother reports that his health is getting better by the day.

As for the woman's husband, he was at work at the time of the fall and received a worrying phone call that prompted him to rush home as soon as possible.

"I ran back home and saw the ambulances, and tried to calm her down, but it was really worrying," he said. Hopefully the couple has since fixed those bathroom floors!