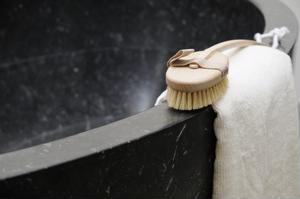 While the standard of luxury in most modern American homes is an elegant whirlpool bathtub with a bevy of modern features, for some people, this simply isn't large enough of a status symbol. Bathtubs play a variety of roles in the contemporary bathroom, but there are some individuals who will put an exorbitant amount of money into these features. The following is the list of bathtubs with price points that are somewhere in the stratosphere, with only the ultra-rich being able to consider these elegant bathroom features.

1. "Le Grand Queen." According to HomeDit.com, the world's most expensive bathtub was sold in late 2011 with a price point of more than £1 million. The bathtub is sculpted out of a rare stone called Caijou, which is renowned through many Eastern cultures for its healing properties. The stone can only be found in certain volcanic regions of Indonesia and was carved from a solid piece of the material. While the jury is still out on the stone's healing properties, it certainly played a large role in its price and its status as the most expensive bathtub in world.

2. Baldi Rock Crystal bathtub. Designed by world-renowned designer Luca Bajola, the Baldi Rock Crystal Bathtub is actually a three-person design. The stunning piece is carved from a single piece of Amazonian rock crystal and measures more than eight feet in diameter. Only a handful of these pieces were made, and one made its way into the famed London department store, Harrod's. The tub sold for more than $850,000 at auction and is truly one-of-a-kind in the world of bathroom design. Ironically, those who missed out on the tub's auction could bid on one of Bajola's rock crystal basins meant to accompany the bathtub.

3. Baldi Malachite bathtub. Another Bojola gem, the Baldi malachite bathtub is made from turquoise malachite that has been hand-carved into the perfect shape by skilled artisans. The stunning appearance of the tub is accented beautifully by its beautiful 24k gold claw feet. According to Most-Expensive.net, the products comes in at more than $200,000, so only the super rich will be able to put this piece in their penthouse, summer chateau or beach house.

These are just a few of the examples of some seriously elegant bathtubs that have a distinct market among the ultra-rich. Would any of these incredibly expensive tubs appeal to your sense of style?