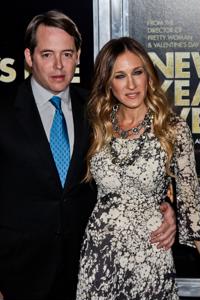 Matthew Broderick and Sarah Jessica Parker are considered royalty in the entertainment industry, whether he is performing on Broadway or she is strutting her stuff on the red carpet. Broderick is known for his many movie roles in films such as Ferris Buehler's Day Off, Glory, Election and many more. Parker is well-known for her memorable performance on the HBO comedy Sex and the City, and a variety of other television and film roles. Like any true American celebrity couple, the two have their own getaway in the Hamptons in Long Island, New York, and they recently opened their doors to share how they decorated the bathroom in their beachside retreat, reports ElleDecor.com.

The couple's bathroom featured a series of classic American design elements that blended with a series of modern amenities. Parker and Broderick opted for a beach-inspired theme in their washroom and opted for two sinks with a baby blue linen cabinet separating the two. The cabinet sits on wheels and provides a helpful surface for everyday tasks.  The perimeter of the room is wrapped in decorative wainscoting and the whole room is balanced with small pops of blue décor that are scattered around the room.

This series of decorations is continued in between the two mirrors that sit above each sink, where the celeb couple has added butterfly artwork and a series of toiletries on matching glass floating wall shelves. While the design of the washroom is quite simple, the symmetrical nature of the room helps to create a sense of balance that works for a beach house aesthetic.

As bright and cheery as Broderick and Parker's choices were in their Hamptons retreat, they also managed to seamlessly blend a series of different design schemes in the room. A series of galvanized iron buckets were used as trash bins in the room, and it gave the room an industrial twist that pairs well with the exposed sink fixtures and other silver elements in the space.

Last but not least, the couple finished their bathroom with two matching wall sconces to complete the versatile washroom. This kind of beach-inspired decorative scheme could be a wonderful option for homeowners looking to revamp their bathrooms. A few modern bathroom accessories, a new coat of paint and a few fresh linens are all one needs to create an impressive washroom that's fit for an A-lister.