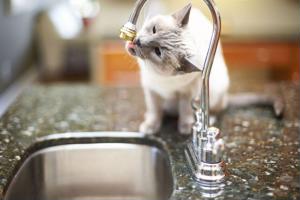 A cat-owning couple from Clausthal-Zellerfeld near Göttingen, Germany, are the subject of comical coverage throughout the country after losing one of their three cats, and finding out he was buried behind the bathroom wall. According to TheLocal.de, the couple was installing a bathroom vanity, and performing a full remodeling project on their washroom that required the drywall to be replaced. Soon after the project, they began to hear faint meowing and clawing sounds throughout the night and initially thought that their house was haunted. Luckily for these absent-minded cat owners, the local fire department was around to help.

When the owners finally realized that one of their three cats was missing, they sprang into action and called the fire department, which was a bit skeptical at first. The firefighters simply couldn't believe that the owners and remodeling experts that put together the bathroom could have completely missed a cat wandering into an open wall.

"We didn't believe it at first and had a team of five search the entire house," fire chief Thomas Bremer told the news source. "You don't really want to destroy a brand new bathroom unless you have to."

To spare their new investment from damage, the cat owners borrowed a camera endoscope from a local plumber to see if the cat was really behind the wall. According to UPI.com, the camera was lucky enough to spot the feline's eyes in the dark. After removing the newly-installed shower and carefully pried open the gap in the wall, the firefighters were able to free the cat and give him back to his owners. All told, the rescue took about three hours to complete, ending up requiring heavy machinery and destroyed much of the new bathroom in the process. While the much of the owners' investment went down the tubes, they finally figured out the source of the late-night scratching and meowing.

Remarkably, after four days of being inside the wall, the cat was unharmed but noticeably shaken after the experience. The feline emerged from the experience exhausted and extremely hungry, but hopefully his owners may have finally gotten the hint to watch after their pets a bit more closely.

How would you have handled this situation if your cat ended up becoming lost behind one of your bathroom walls?