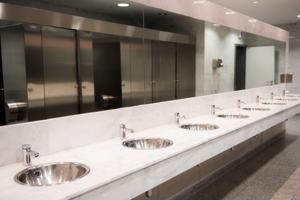 Anyone who has lived in a college dorm will tell you that sharing a bathroom with 20 other people on the same floor can be annoying, and sometimes a bit gross. However, most people never had to deal with the horrors plaguing Pierce Hall at the University of Chicago. According to UPI.com, the school has closed down several facilities after the toilets were exploding - literally.

"In a 24-hour period, the plumbing exploded twice, and exploded with such force and severity that a toilet bowl...shattered, throwing porcelain shards across the bathroom," Michelle Rodriguez, a first-year student at the school, told a student government panel.

While the source of the exploding toilets has yet to be identified, the campus' aging facilities have led to a rash of water outages, unsanitary conditions and, of course, the occasional exploding toilet.

Thankfully, the University of Chicago is hard at work on the problem, and has even considered installing a wide range of new bathroom accessories to improve student conditions. But for anyone who's ever had to deal with a combustible commode, they may want to consider an off-campus apartment. Do your alma mater's bathrooms compare with the situation at the University of Chicago?