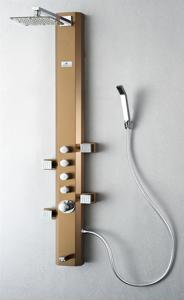 In the ever expanding world of bathroom technology, companies all over the globe are trying to find new ways to reinvent the conventions of a standard shower. According to Trendir.com, Graff has introduced its new Aqua Sense shower system jam-packed with modern features that is meant for only serious, and wealthy, consumers.

One of the most noticeable features is that the showerhead is placed into the ceiling of a shower stall and is ringed with LED lights that can be changed from the digital control system. Additionally, the showerhead is surrounded by a series of speakers that can play satellite radio or MP3s.

Along with these many conveniences, the shower system also features cascading faucets that are built into the wall that can rotate with a press of the touch screen controls. All in all, this system looks like it will be popular with many upscale consumers who are looking for everything in a shower.

Thankfully, those who are interested in many of the Aqua Sense's features can find almost all of the same benefits in easy-to-install shower panels. How has your shower experience changed since you made the switch to a shower panel?