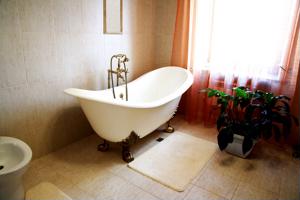 The Dunlieth Historical Inn has been a fixture in the Natchez, Mississippi, community for years and boasts many modern features from the time period it was built in: the 1850s. However, the inn has something that sets it apart - it boasts one of the earliest examples of modern plumbing with hot and cold running water and an indoor toilet dating from the pre-Civil War era, according to MSNBC.

The bathroom is a remarkable example of early bathroom technology - the Dunlieth bathroom contains a toilet and an L-shaped tub-and-bathtub combination. The water was drawn from the laundry room on the first floor where it was heated and then transferred into a cistern upstairs.

What's most impressive about the Dunlieth bathroom is that the shower contained a rather large showerhead, about 10 inches wide, which would replicate a rainfall effect that many modern upscale devices strive for. Most of the large components and bathroom accessories were donated to the National Park Service, where they will be used in a future exhibition.

In an era when most Americans were using outhouses, this piece of technology changed the nature of home sanitation forever. Today, in which most of us take running water for granted, do you think you could have made it through the time period before indoor plumbing?