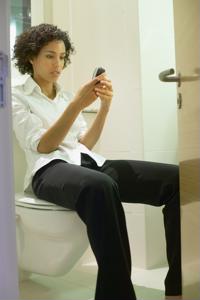 If you're the kind of person who likes to send a few texts, check emails and make a few calls while on the throne, you certainly aren't alone. According to a recent survey dubbed "IT in the Toilet," a staggering 75 percent of Americans have admitted to using their phone in the bathroom, reports CBSNews.com.

With the advent of smartphones, it's not entirely surprising that people would take their most commonly-used device with them to the washroom. However, a few statistics stood out in the survey - 63 percent said that they had received a call while on the toilet, while 41 percent decided to multi-task and make a call while doing their business.

The survey also illuminated the difference between genders. While approximately the same number of men and women have admitted to bringing their phones with them, 30 percent of men always bring their phones into the bathroom, while women bring their device 20 percent of the time, according to the Huffington Post. While the numbers are certainly interesting, they illuminate just how important cellphone use has become in our day and age.

It seems that cellphones are one of the hottest bathroom accessories out there, and increasing numbers of people are using this spare time to their advantage. Are you a regular phone user in the bathroom?