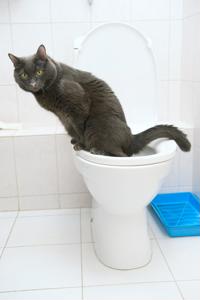 Anyone who has ever taken a trip to Japan will tell you that the toilets are filled with modern features that most Americans would only dream of. While the Japanese have been reaping these benefits for years, one Japanese family has been struggling to keep their feline off the commode. According to RocketNews24.com, a YouTube user recently posted a video of the family cat using the bidet function on the toilet, making quite a mess in the process.

The family found out about the cat's use of the bidet after finding a large puddle on the floor. Apparently, the cat had been hovering over the toilet and keeping his paw on the spray function button. While some of the water helped the cat get clean, the majority went onto the floor.

While the cat certainly makes quite a mess each time, the family has been awestruck by his resourcefulness. He is even known to press the "test print" button on the family's printer just to see what will happen!

Remarkably, the cat learned how to use the bidet on his own without encouragement from the family, which is something that most cat owners take months to teach their felines. Have you ever tried to potty train your feline?