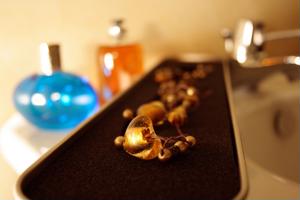 Four months ago, Ann Aulakh was up in the middle of the night using the bathroom and haphazardly dropped her gold necklace in the toilet, figuring it was gone forever. According to the Daily Mail, Aulakh received a stroke of luck this week when local sanitation employees found the jewelry while cleaning out a pipeline in San Rafael, California.

Aulakh's friend had left a message with the sanitation office to warn sanitation workers to stay on the lookout for the lost necklace. The employees remembered the message and did their part to clean up the jewelry and personally deliver it to Aulakh's home. Oddly enough, the necklace came just in time for her to wear it for her 19th wedding anniversary.

"I was just amazed at the kindness of actually delivering it, I thought that was wonderful...It really does bring back faith in people," Aulakh told the news source.

According to Statesman.com, the necklace was a gift from Ann's husband from their first Christmas together in 1993 and she is overjoyed to have it back. Have you ever lost anything important and had it returned to you months later?