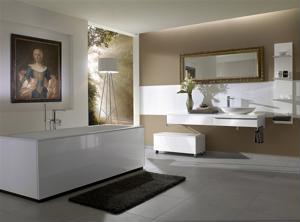 The Christian Science Monitor reports that Americans' standard of living has dropped to its lowest level in 50 years, with most Americans having less disposable income.

According to the news source, the average individual now has $1,315 less in disposable income than he or she did three years ago at the onset of the recession. This means less money to spend on dinners at restaurants, new clothing and home improvements.

However, experts say that regardless of the economy, many people have continued to invest in their homes by renovating rooms such as the bathroom. For many, remodeling is cheaper than moving and can add value to their homes. In fact, Remodeling magazine's annual Cost versus Value report finds that individuals who invest in a bathroom renovation project complete with a new bathroom vanity, faucets and accessories can expect to recoup as much as 64 percent of their investment when they sell their homes. Those who add additional bathrooms in their homes can expect a 53 percent return on their investment.

Others with less disposable income have budgeted their money to improve their homes, knowing that they won't be able to afford vacations and other luxuries as often as in previous years. This has led to a trend in spa-like home bathrooms that include items such as steam showers, whirlpool bathtubs and other luxury products.