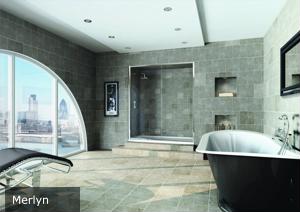 A new report released by the International Furnishings and Design Association (IFDA) finds that homes will continue to get smaller but will contain more eco-friendly amenities in the next decade.

While rooms throughout homes are expected to get smaller, the IFDA's "Vision for the Future" survey revealed that when it comes to bathrooms, smaller doesn't mean scaled back.

"Although the trend towards larger bath space has slowed down, 83 percent of the design industry pros feel that luxurious bathroom products such as spa showers, high-tech fixtures and TVs are on the rise," according to a review of the findings on FurnitureToday.com.

Renovating a bathroom to make it into a personal retreat user has been popular over the past few years, despite the recession and difficult economic times. Some design experts say that the economy may have fueled the popularity of these hotel-style luxury bathrooms, as many who know they won't be able to spend money to travel to five-star hotels often are deciding to bring the luxury of their favorite vacation spots to their bathrooms.

Homeowners can add a sense of luxury to their bathrooms by installing beautiful bathroom vanities and spa-like whirlpools, bathtubs and steam showers.